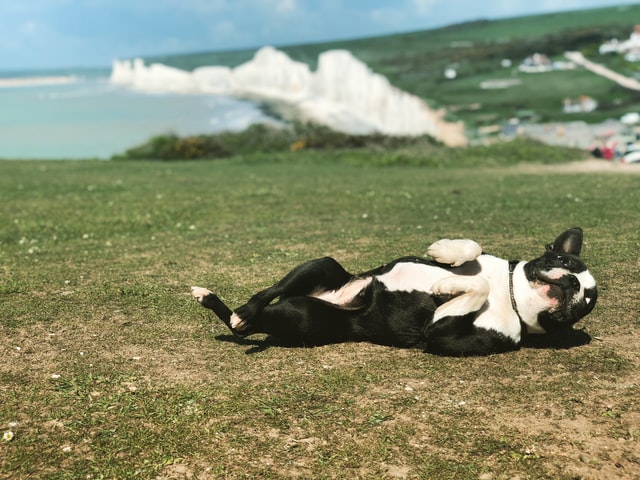 Why Do Dogs Roll Around in Smelly Things?

Do you ever wonder why your pup rolls around in repulsive smelling things?

Dogs may also roll around in poop because it is instinctual for them. Dog ancestors would roll around in their own poop or even other animal carcasses to cover up their own scent while they hunted.

Another reason may be because dogs like to tell a story through their smell. For example, rolling around in an animal carcass shows that they’ve had some type of adventure involving that animal. This theory hasn’t been proven, though.

The most important thing to note is that all of this is completely normal! Of course, there are ways to prevent this so your nose doesn’t have to suffer! Cleaning up after your dog immediately after they go can prevent them from rolling around in their own poop. Make sure to keep your dog near you during walks so they can’t roll around in other dog’s poop, garbage, or anything else smelly.

You could also try carrying around a spray bottle full of water. Whenever they roll around in something smelly, squirt them with water. Eventually, they will notice they only get squirted when they roll around, so they will stop performing that action. The only thing is that you have to spray them when they are rolling around, or immediately after for this to work. You can get the same effect by using a citronella collar or by playing a buzzing noise. Your nose will certainly be very happy!

If your town is not listed here,